Episode 5: There is Another Sky

Is there another sky? Apparently so. 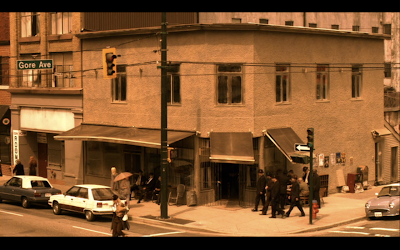 Early on we pay a return visit to Goldie's OTB. I like that they left the Gore Ave. street sign intact in the shot. It's still early in the series, and already the visual effects team has bigger fish to fry.

We soon get our first glimpse (but far from our last) of New Cap City: 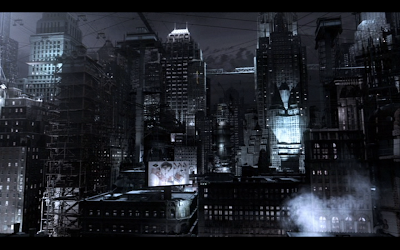 Per the podcast commentary, this is completely CG'd. But it looks really cool.

We later visit a location in New Cap City that is all too real: 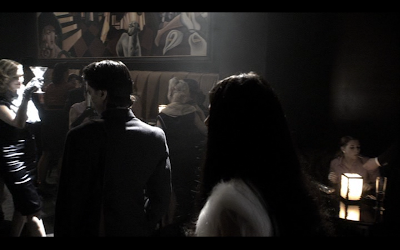 I figured this was too detailed to be a set, so I searched Google for "art deco Vancouver" and found the Gotham Steakhouse. Here's a picture from their web site: 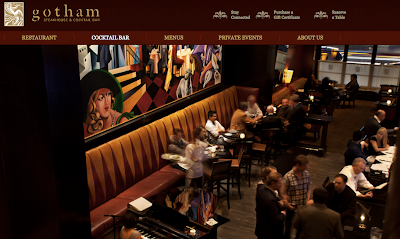 The picture and the upholstery match! I know where I'm eating dinner next time I'm in Vancouver.

We get another glimpse of New Cap City, both now and at the end of the episode: 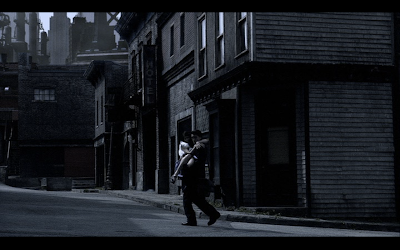 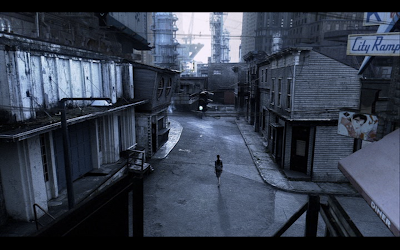 Per the podcast commentary this shot was pretty heavily CG'd, but I figured the close-in ground-level buildings actually existed. I was doing some random searches for Vancouver filming locations, thinking that that might provide some inspiration, and came across a reference to the Terminal City Iron Works. I pulled up an aerial picture: 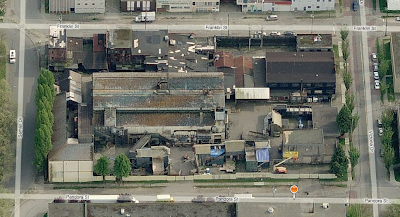 I thought this looked more like a studio backlot than an active smelting location. So I pulled up a street view: 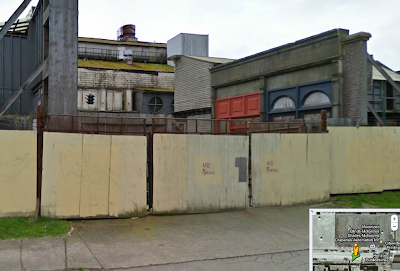 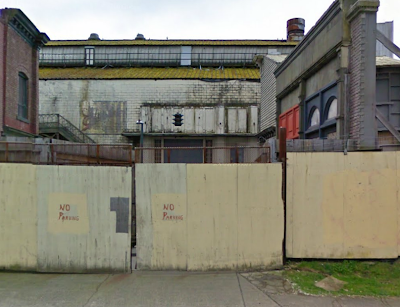 You can see the building with the round vents, the streetlight, and the blue garage door. No reason to think this isn't the place! 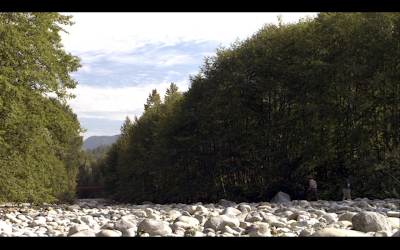 Per the 13th Colony's web site, "The ill-fated Adama fishing trip was shot in Lynn Headwaters park in North Vancouver." After scouring the birds-eye aerials from Bing maps, I found the following:

This is just west of Inter River Park, near the intersection of Inter River Road and Lillooet Road in North Vancouver. I'm not sure whether the scene was filmed upstream or downstream of the bridge, but I am fairly certain that this is the red bridge you can see in the background. 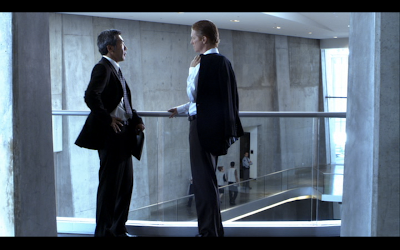 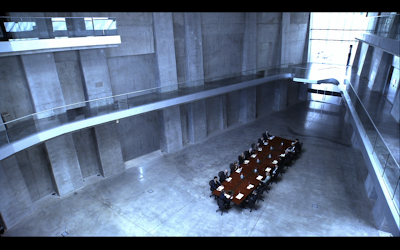 Turns out this is the British Columbia Institute of Technology's aerospace campus in Richmond, at 3800 Cessna. Here are some pictures I took during a visit in the summer of 2012: 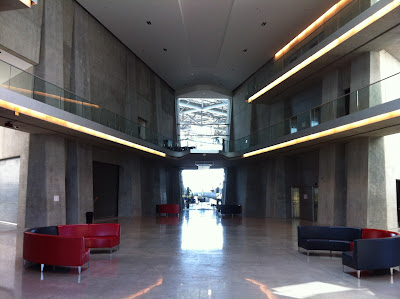 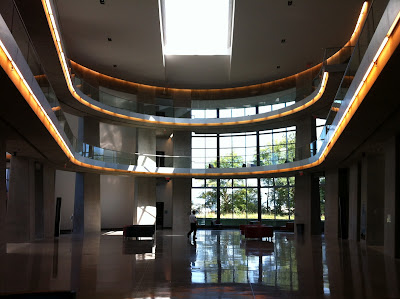 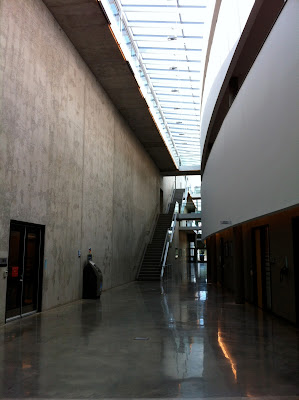 Now it's time for a bank heist: 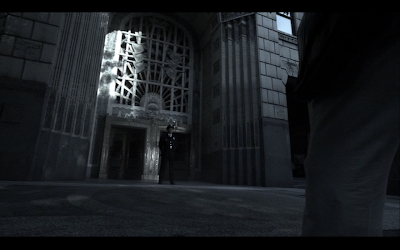 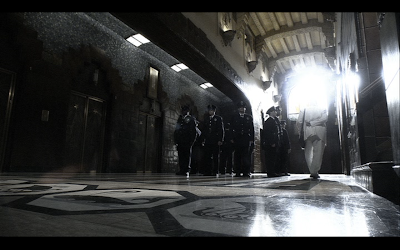 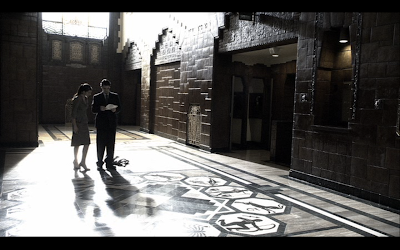 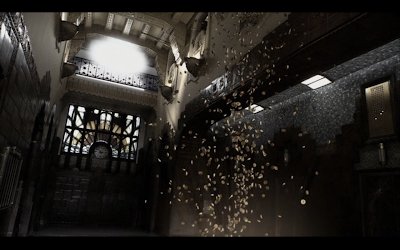 This is the Marine Building in Vancouver. Fortunately I managed to make it to Vancouver on a weekday so I could take pictures of the lobby: 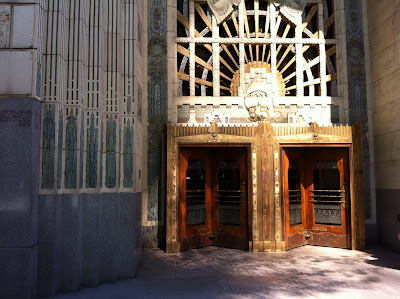 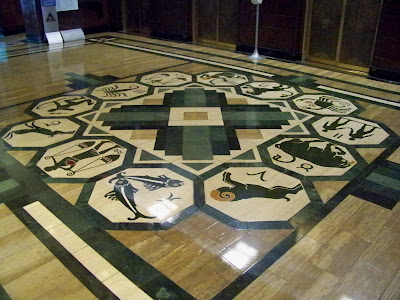 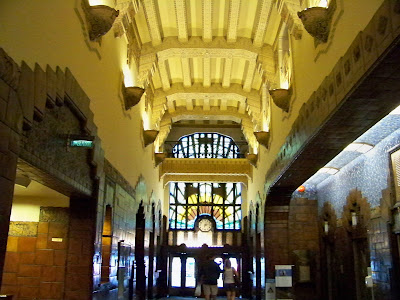 At the end of the episode, Joseph chases some kid down the most filmed alley in Vancouver: 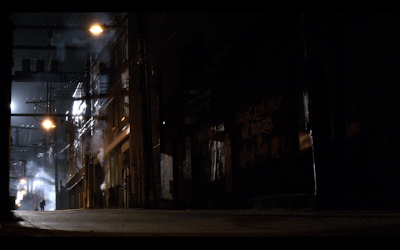 But we've been here before, haven't we?